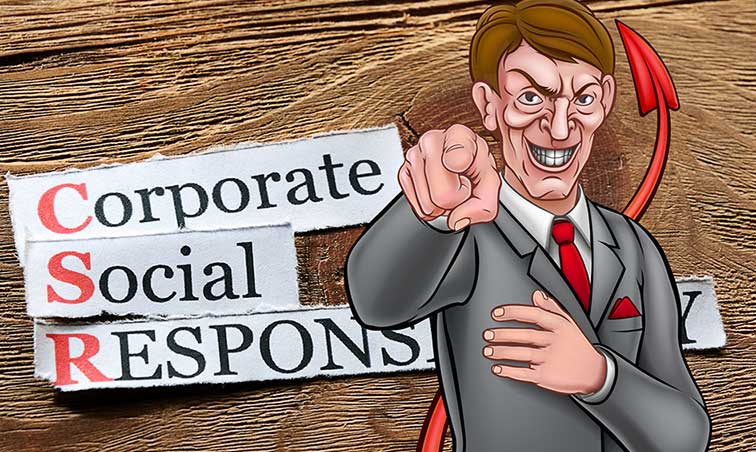 The notion of Corporate Social Responsibility (CSR) has been around for decades – arguably since as far back as 1953 when Howard Bowen published his book “Social responsibilities of the businessman”.

The controversy surrounding this notion has raged for just as long, in its essence pitting Milton Friedman against Edward Freeman – the former claiming that a business’s sole responsibility is to create value for its shareholders, while the latter contending that the responsibility for value creation exists towards all stakeholders.

There can be no doubt that from a moral perspective, Corporate Social Responsibility has been an enormously positive trend: companies today are dramatically more considerate of the societies and communities around them, and of their environmental impact than they’ve ever been. But that does not necessarily make them more ethical.

One way of looking at Corporate Social Responsibility is through the ESG lens, reflecting the Environmental, Social and Governance criteria used by the investment community to measure a company’s sustainability.

According to that approach, there are three main pillars that make up a company’s moral responsibility (or in other words, the responsibilities it has beyond its economic and legal ones):

1. Environment: also known as Planet from the triple-bottom-line (TBL) model of People, Planet, Profit – this covers the most often talked-about elements of a company’s Corporate Social Responsibility and sustainability profile as it relates to its impact on the environment: CO2 emissions, pollution, waste, energy effectiveness, renewability, recyclability, water intensity, circular economy etc.

2. Social: from the good-old corporate philanthropy (think reducing poverty in Africa or sponsoring the local football team) all the way to the more up-to-date corporate efforts around human rights, diversity, community involvement, employee wellbeing, animal welfare etc. This component can also be seen as People in the above-mentioned TBL model.

3. Governance: this third element differs from the previous two in that it does not describe specific activities or strategies. It rather describes the way the company structures itself, manages its decisions, and in general – how it behaves.

This ranges from “hard” principles of corporate governance like transparency, disclosure, accountability, control and so on – to the “softer” principles around fairness, ethics, and integrity (that are mostly aimed at preventing negative phenomena such as corruption).

The imbalance mentioned above between these three pillars – where the first two are action-oriented and the third one is behavior-oriented – does not end there; it is also reflected in the way these pillars have developed in recent years.

While the first two have gradually become more proactively managed and incorporated in strategy, the third one is still mostly managed defensively and is rarely seen as part of a company’s strategy, positioning or point of differentiation. And herein lies the problem.

As environmental and social strategies are starting to be seen by executive management teams and boards of directors as part of the company’s value creation, they are becoming a higher priority and relevant to the entire organization. Yet, as long as corporate governance remains a defensive “tick-box exercise”, it will not be seen as creating business value. Therefore, it will remain the exclusive domain of compliance and legal teams – rather than become incorporated in the company’s operations.

Some may ask whether it is at all possible for topics like ethics and integrity to become part of a company’s strategy and value creation. In my opinion, it most certainly is. And while there is no easy formula for that, there are several basic principles companies and leaders should follow to make that happen:

Shift Focus from Responsibility to Integrity

it may be seen as semantics by some, but while responsibility is intuitively connected to duties and expectations from others – integrity suggests an internal moral code.

While the former is a formal role-based construct driven by legislation, the latter is a behavioral people-based construct that is driven by culture. As such, it applies to both intentions and actions, and creates a more direct link between the company and the individuals that comprise it; after all, the behavior of the company is the sum of the behaviors of its individuals.

Another good example is Siemens – while it was forced to so following its corruption scandal in 2006, its $100 million Integrity Initiative and other integrity-related practices have since become a role-model approach.

Purpose is becoming somewhat of a buzzword. Yet, the notion that a company needs to be driven by an idea that is bigger and higher than a commercial goal is not new.

When companies are truly committed to such an idea, they can more easily and effectively shape their actions and behavior in a coordinated way. This way, “doing good” and “making money” don’t become two disconnected forces pulling the company and its ethics in opposite directions.

Companies like Unilever, Whole Foods, Patagonia, CVS, REI, Zappos.com, The Body Shop, Toms, Etsy, Novo Nordisk and countless others have been vigorously demonstrating in recent years, how and why it pays to be purpose-driven (in dollars, not just brownie points).

In any hierarchical organization, leaders act as role-models, and companies are no different.

When leaders and managers practice and demonstrate ethical behavior, and when they reward such behavior among others (and punish its absence) – an ethical culture will emerge. This is so much more important than having an exemplary code of ethics and conduct. While many companies have such a code, they also demonstrate work practices that turn out to be highly unethical.

Building a culture of integrity top-down requires tools like leadership development, training, award and recognition programs, and the incorporation of integrity as a key criterion in performance evaluation and KPIs.

Another way to get leaders to role-model integrity is by involving the board of directors and making it the ultimate guardian. Not just of the company’s performance, but of its character too. Companies like UBS, Citigroup and Centrica are showing the way by having dedicated board committees dealing specifically with culture and ethics.

In simple words, the above-mentioned principles aim to build a culture of integrity that permeates the company’s DNA and becomes part of the way it creates value.

Whether you subscribe to Friedman’s or Freeman’s views on the responsibility of corporations, you will surely agree that a case like Dieselgate – where Volkswagen was found to be cheating emissions tests of Diesel cars in the US in 2015 – shows how the failure of doing so by a CSR champion turned out to be highly irresponsible and led to substantial damage to both shareholders and stakeholders.